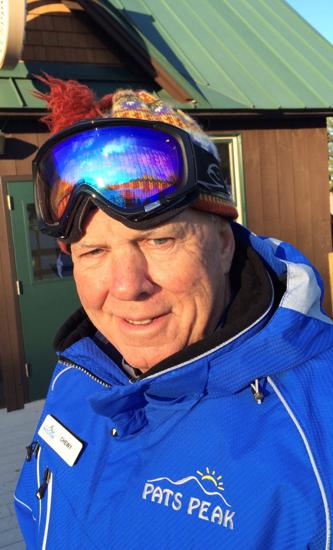 Peter White Holland, 74, also known as “Chewy”, but definitely not “Mr. Holland”, passed away on July 20, 2020 after a brief illness.  He was a resident of Brookfield, NH.

Born in Portland, ME on September 29, 1945, Peter was the son of Barbara (Healey) and Robert Cades Holland.  He grew up in Andover, MA and moved to Bedford, NH in 1980 where he spent 35 years raising his family before retiring to Brookfield.

Peter’s early education began at the Pike School in Andover where his avid appreciation for the fun in life became apparent. He ended up spending more time on the bench outside the Headmaster’s office than in class.  But that was ok. He later graduated from the Canterbury School in CT, where he earned the nickname “Chewy” for his enthusiastic caloric intake prior to football games.  Chewy’s training meals were a little bit different from his teammate’s. He entertained for one year at Lake Forest College, before being drafted and proudly served in the Navy from 1967-1971.  Peter then attended and miraculously graduated from Babson College in 1971.

Peter considered himself a food connoisseur and his idea of the perfect Thanksgiving meal was hot dogs with yellow “mustahd”, French Fries and pepperoni pizza. Dessert would be a jar pepperoncini peppers with a side of anything chocolate.

Nobody loved an underdog more than Peter. He forced his family to watch “Miracle on Ice” and “Harvard Beats Yale 29-29” repeatedly. He was known for crying more at Miracle than the birth of both of his children.

Peter worked at Worthen Industries, headquartered in Nashua, NH as a Business Unit Manager for 43 years before retiring last February. He also served on its Board of Directors. In his recent retirement he was appointed to the Planning Board for Brookfield.

Beyond work and family, skiing was his greatest passion. A hockey player in his earlier years, Peter was introduced to skiing at Black Mountain when he was 12 years old.  It was all downhill from there because he became obsessed with all things skiing and never missed an opportunity to talk about it; winter, spring, summer and fall. In 1980 he became an instructor at Pats Peak in Henniker, NH where he worked for his wife, the other love of his life, until she retired 2017.

Peter also spent years coaching aspiring racers at Waterville Valley, Franconia Ski Club and most recently at Abenaki Ski Club. Through his coaching of athletes (and parents of athletes), he tried to foster a love of the sport rather than a focus on short term results.

Peter had a unique perspective of the ski industry in that he always tried to merge ski instruction with ski racing. He established a two-day New Hampshire Alpine Racing Association (NHARA)/Professional Ski Instructors of America (PSIA) coaching clinic for both instructors and coaches who came from all over New England to attend. This was a source of great pride for him and he looked forward to it every year.  Peter logged every day he spent skiing in his calendar and was very proud of being on snow at least 100 days a season.

He was a longtime member of the NHARA Board of Trustees, a level three Technical Delegate, a level three Certified Instructor with PSIA and Treasurer of the Eastern Division of PSIA. These were the only accolades he cared about.

Within the last few years, Peter began volunteering at the Abenaki Ski Club in Wolfeboro, NH. Never afraid to offer his “two cents”, Peter lent his expertise to the club to help formalize its race program, coach athletes and help to expand snowmaking. He took great pride in being involved at Abenaki. And he loved it.

Peter was adored by his grandchildren who referred to him as “Chewy Chew Snowballs”. He loved attending their ski races, lacrosse and soccer games and was looking forward to teaching them how to ride a dirt bike as soon as they turned 16.

He is survived by his wife of 51 years, Roberta (Avery) Holland; a sister Elizabeth (Holland) Vaughan of Brunswick, ME; a son Robert Cades Holland II and his wife Genevieve of Hopkinton, NH; a daughter Avery Holland Murdock  and her husband Colin of Andover, MA; and four grandchildren, Parker Bye Murdock, Peter White Holland II, Wyatt James Warfield Holland and Grace Farnsworth Murdock (who he nicknamed Eloise for reasons still unknown to her…or to anyone else).  All of whom will miss him beyond words.

Due to the coronavirus, there will be no service until spring, but in the meantime, well-wishers are enthusiastically encouraged to drink a Coors light (bottle only please) and eat a hot dog or two (natural casing of course), in his honor.